Full stack web developer who has done a bit of android. I speak fluent Javascript and occasionally I python when I need space. User Experience is near and dear to my heart.

starting out on uva

Kattis has been fun, recently I hit 100 points. It was an amazing feeling. Now my appetite for competitive programming has grown even more. I want to learn what those top 50 members have done to get to where they are. So naturally I started looking around other peoples profiles, googling their names and I noticed a trend. People who have over 500 points are serious competitive programmers and most have UVa accounts. I suppose having a UVa account helps one to improve faster. Its only makes sense that exposure to more programming problems leads to improvements in problem solving skills even if you don’t solve majority of them.

According to wikipedia, UVa Online Judge is an online automated judge for programming problems hosted by University of Valladolid. Its pretty much like kattis and I love Kattis, time to open an account.

The user interface isn’t user friendly, After all its an online judge not a work of art. It won’t be winning an design awards soon. Reminds me of codeforces After login in the page doesn’t change much. The most important difference being It only adds a “My account” option on the side menu.

Solving my the first challenge on UVa

Finding a challenge to tackle UVa is notoriously difficulty in fact someone built a website just to solve this issue. Its prominently advertised on UVa, a link appears at the bottom of the menu. I turned to uHunt to find my first challenge. I found and decided to tackle a problem labeled cost cutting

Quickly coded up a solution, and submitted it. Having used Kattis, hackerrank and codeforces. I expected to be redirected to the submission result page. Sadly this was not the case and it only added an alert on top of the current page.

I was literately in panic mode, I thought maybe I could get the submission result through uHunt. I went to uHunt directly and entered my username but it couldn’t find me through my user name. I accessed it through Clicking on My uHunt with Virtual Contest Service and that loaded up the page. Maybe I need to solve one problem before I can get accepted by uHunt.

Later on I found out that it had something to do with uHunt’s API and not the result of the submissions.

Eventually I went clicked on the My submissions link to see the outcome.

Later found out that meant my code was giving out the correct output but it wasn’t properly formatted.

You can actually see the global ranklist 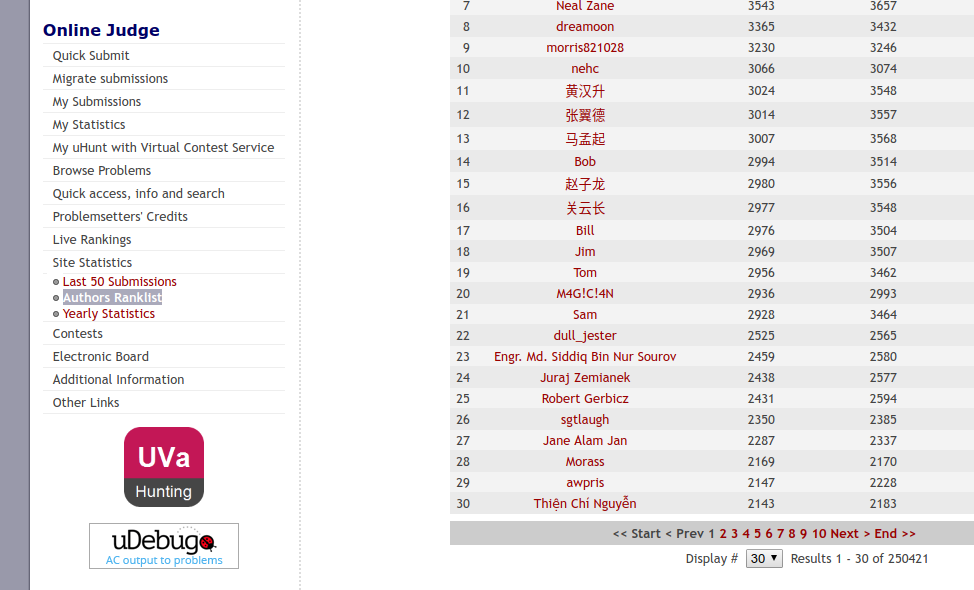 Unfortunately you can’t do that on Kattis.

You can actually see which languages are popular on the site since 1997. It seems they only recently started accepting Python submissions in 2016. Java and C++ taking the cake.

The UVa experience leaves a lot to be desired. I hope to solve more problems with the passing of time and hit 100 problems solved on UVa.